After having marginal results on 17 meters using my Alpha-Delta DX-EE with a tuner, I put up a resonant dipole. The dipole worked pretty well as most resonant antennas do; however, after considering some other alternative wire designs I decided to try a full wave Delta Loop. After using the loop for a couple of days with decent band conditions, I have never looked back. It's performance compared to the dipole has been very impressive. Please note that the DX-EE is designed for 40-20-15-10 and works very well on the these bands; therefore, tuning it up on 17 came with no expectations other than to see if I could hear something.

The diagram above depicts the 17 and 20 meter delta loops setup at my QTH. Height wise, it probably represents a worst case scenario since the 17 m DL  slopes off of my push-up pole from about 22 feet up the pole and the base of it's triangle is only 14 feet off of the ground! The 6x8 utility trailer that is parked directly below it doesn't seem to affect it's efficiency at all. My larger 20 meter delta works just as well sloped off of my chimney at only 18 feet or so up. I contacted AL7AC in and for my final state of Alaska for Worked All States on the 20m looper and N8S in a pile up at Swain's Island on my full wave 17m resonate copper triangle.

A delta loop fed from the bottom or top is horizontally polarized and can be vertically polarized by feeding it  from a corner at the base. Many antenna Elmers note that the DX performance is better on a Delta  with vertical polarization but the top feed has not kept me away from plenty of great DX contacts all over the world during a time when the sunspot cycle isn't at it's best. I chose to feed it at the apex (a) to give it a moderately high radiation angle and horizontal polarization. Mainly to avoid bombarding the houses next to and behind me with RF.

I constructed this antenna with the most streamlined and easiest layout for my particular QTH. What attracted me to try a Delta the most was the Delta's reputation for working well close to the ground. And Boy, does it. Since it is a full wave antenna, you get twice the wire of a dipole into and onto the air. Divide the wire length shown in the table below for the desired band by 3 to determine the size of the triangle. The distance required between the rope tie off points is most likely the only show stopper for some residential QTHs.

The raw impedance of this loop is 90 to 120 ohms and a 1/4 wave length of 75 ohm coax can be used to match it. (some say use 73 ohm coax) However, the high quality W2DU 1:4 current balun  ( Catalog # W2AU4) was chosen instead because regular RG8x 50 ohm coax connected right to it and it was a faster setup than hassling with cutting and connecting a matching stub at the feedpoint. Further, it provides a solid mechanical base for the apex of the triangle to tension the base and sides from and has a built in lightening arrestor.

To determine the length of the wire needed for the desired band, simply divide the desired resonant frequency in Mhz into 1005  eg. 1005 / 18.118 = 55.31 feet for midband 17 meters. Make sure that the 1:4 balun you choose supports the desired band and you are good to go. Stretch the delta out in a triangle on the ground and mark the wire at the 1/3 and 2/3 lengths to assist you with the location of the bottom insulators when you string her into the air to get as perfect of a triangle as possible for your QTH. I didn't perform this useful oversight but will on future loops. Also, I used a formula from an article I saw on eham on the Delta for my initial wire cut which ended up being too short. It was resonant at 19.400 Mhz or so and I added the amount of wire that put it very close or equal to the result shown above. Cut it two feet or so  long if you prefer removing wire instead of adding. An antenna analyzer was a big help while tuning and the additional wire needed was easily spliced together and soldered. After tuning, the SWR range across the entire band from bottom to top ranged from 1:1.3 to 1:1.15. Be sure to wind  6 to 8 turns of coax about the diameter of a coffee can at the feedpoint to keep RF out of the shack and to provide a higher impedance path for lightening. The antenna doesn't have to tie off into a perfect triangle, square. or rectangle to function;  however, scuttlebutt among HAMs is that it does it's best as a triangle or square.

If you have been thinking about a Delta loop in place of a dipole, you should seriously consider it. It does take up some ample real estate even in it's 17 or 20 meter flavors compared to a dipole, but in my case it has been well worth it. Unfortunately, this DL configuration  is not resonant on any other bands but there are multi-band Delta designs available that use ladder line at the feed point in addition to a ladder line matching stub on the opposite end. However, you may find that your mono band delta loop may tune up on it's second harmonic at a higher frequency  eg. 160 m loop on 80, 80 m loop on 40, 20 m loop on 10, etc. My SWR testing on the second harmonics showed  RF and SWR needles swinging up and down together which usually isn't a good indication of an efficient antenna. I have also learned that tuning up at the desired frequency seems to provide the best signal to noise ratio for the human ear; however, those without a tuner should have no fear after building their delta resonant for the band.

Listening in on two or three simultaneous QSOs on the same frequency that can't hear each other has been a real joy and is just one testament of the advantages I have found with these delta loops. The two to three less S units of ground noise over the dipole is probably the best feature of a loop and makes a dipole vs delta gain debate not worth the effort.

17m Delta at the apex

17m Loop from the base

20 meter delta strung off a top corner of the chimney 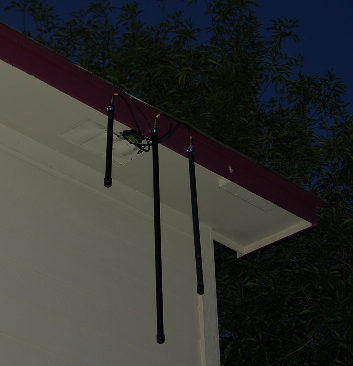